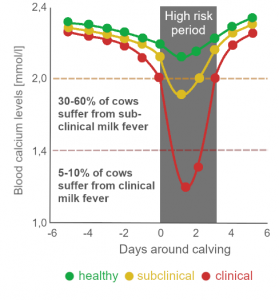 The cause of periparturient paresis is a calcium deficiency in the blood. Calving induces milk synthesis in cows, which results in significantly increased demand of nutrients, in particular calcium. For 10 liters of colostrum, approximately 23 g of calcium are needed, which equals 9 times the amount of calcium in the entire blood plasma.

In order to cover the enormous demand, large quantities of calcium need to be made available. This can be achieved through mobilizing calcium from reservoirs such as the bones or through increased uptake from feed. In case the demand cannot be covered, blood calcium levels drop leading to periparturient paresis.

The graph above shows a typical course of blood calcium concentration around calving. Depending on the magnitude of the calcium decrease, the periparturient paresis is either subclinical or clinical.

Calcium – a Key Player in Metabolism 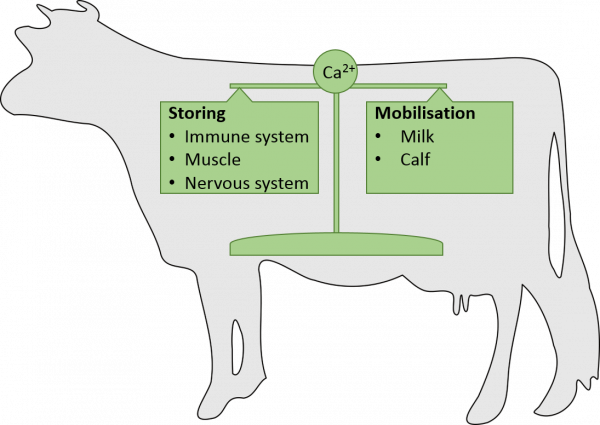 Calcium is involved in essential metabolic processes and plays a crucial role in:

To prevent periparturient paresis, calcium supply should be adapted to every phase of lactation. A tailored calcium-adapted diet is particularly required during drying off and in the early phases of lactation.

Additionally, several approaches for hypocalcemia prevention can be applied: 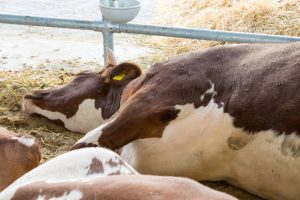 A clinical periparturient paresis left untreated is often fatal for the animal. An affected cow is usually treated by the vet with an intravenous calcium administration. Depending on the severity of the paresis, the treatment has to be repeated several times. 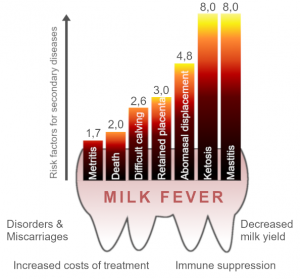 The drop in the blood calcium levels has a tremendous impact on the animal´s metabolism.

Clinical periparturient paresis leads to a reduced excitability of the muscle cells, which is reflected by instable posture, impaired coordination and problems with getting up.

In the worst case, the calcium deficiency can lead to recumbency and severely injured limbs.

Not only skeletal muscles, but also smooth muscles such as the gastrointestinal smooth muscles, uterus muscles and the teat sphincter can be affected by the calcium deficiency. This is of particular importance in cases of subclinical hypocalcemia. Although cows with subclinical hypocalcemia do not lay down, they suffer from various secondary diseases.

In the gut, decreased contractibility and reduced motility can lead to constipation and depression of feed intake. In the uterus, the calcium deficiency can attenuate uterine contractibility required for calving and placenta delivery, which can cause difficult calvings and retained placentas.

In the udder, reduced contractibility of the teat sphincter muscle produces an inadequate teat canal closure which offers an ideal entry point to pathogens, thereby leading to a significantly increased risk for mastitis.

Since calcium plays a central role in the activation of the immune system, a calcium deficit can cause a generalized immunosuppression with serious consequences for the remaining lactation period. The figure above shows how the occurrence of periparturient paresis affects the risk for secondary diseases. 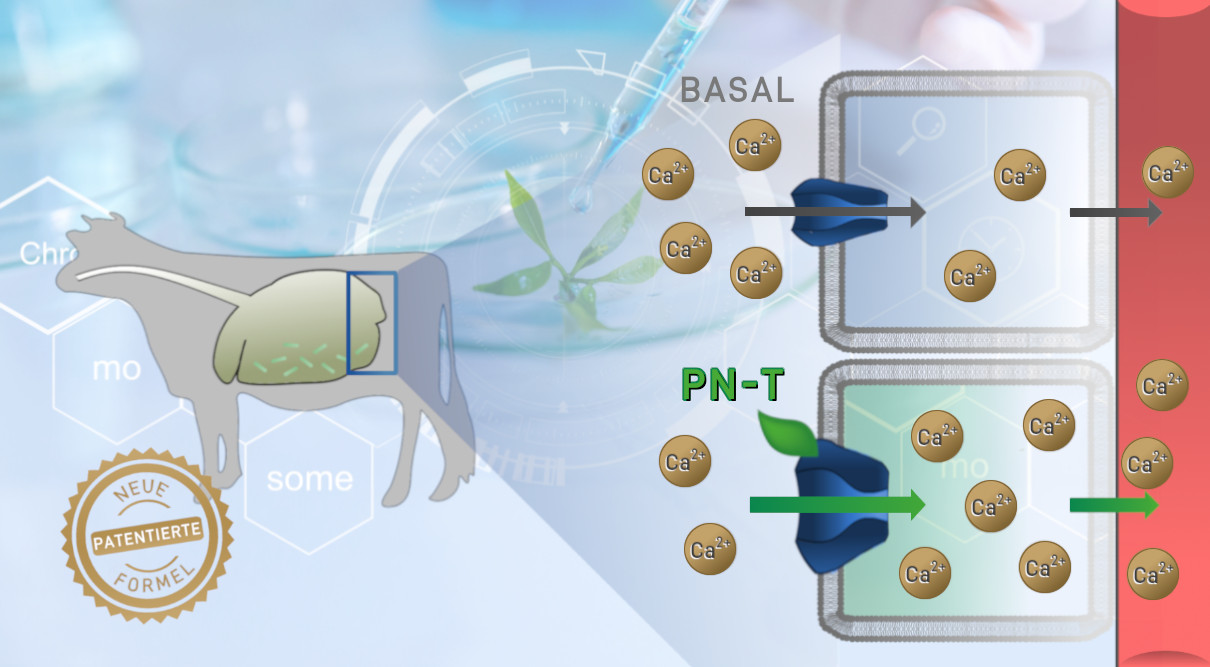 The uptake of calcium in the gut is mediated by transport proteins. In ruminants, a great proportion of calcium is already absorbed in the rumen, which is one of the four forestomachs. Particularly at the start of lactation, the uptake of calcium from the feed is not sufficient to cover the enormous demand of the cow. Hence, an increased calcium resorption could help to prevent the occurrence of periparturient paresis.

It was shown in various in vitro and ex vivo studies with isolated ruminal epithelium that the transport proteins responsible for calcium uptake can be activated by specific phytogenic compounds. Addition of such compounds increased the ruminal calcium uptake significantly (Rosendahl et al, 2016).

These results could be confirmed by in vivo feeding studies with lactating dairy cows: supplementing a feed additive based on phytogenic compounds led to significantly increased blood calcium levels (Braun et al., 2018). Hence, the tailored use of phytogenic compounds to improve calcium homeostasis offers a new approach to prevent periparturient paresis.