Calf diarrhea is one of the most common cattle diseases of all, affecting approximately 40% of all calves (Girnus, 2004). Furthermore, 50 % of calf mortality is due to diarrheal diseases (Tautenhahn, 2017). In addition to the high incidence, the costs incurred by diarrheal diseases in calves are also very significant. Mild diarrheal diseases already cause costs of about 108 € per calf. Depending on the severity of the diarrheal disease, the costs amount to 263 € per calf (Lührmann, 2009). Studies also showed that diseased calves give an average of 344 kg less milk in the first lactation (Svensson et al., 2008). Acting quickly before a severe disease manifests itself, and providing optimal care during the disease phase, can mitigate the progression and reduce losses.

Fortunately, the intestine has an enormous regeneration potential and can recover completely soon after an infection has been overcome. The prerequisite is that timely and targeted action is taken. 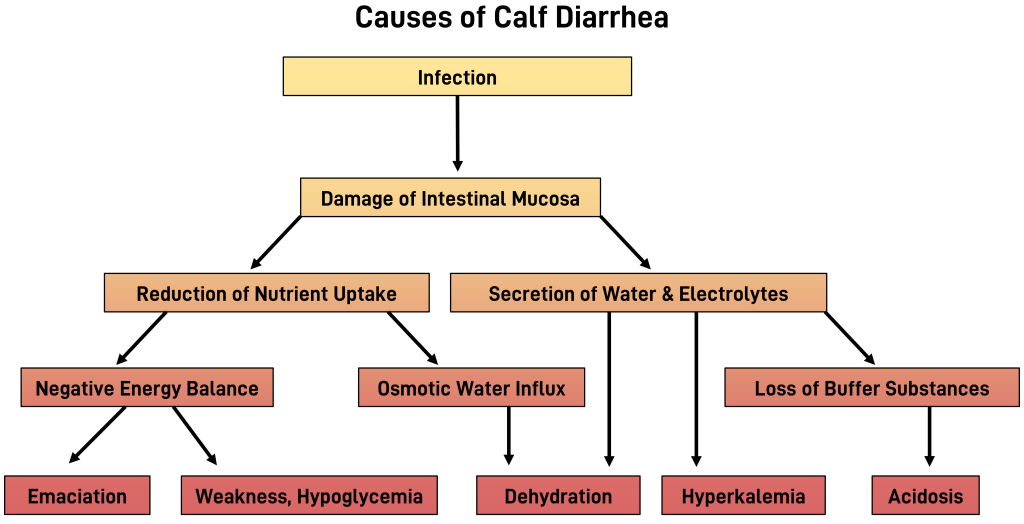 A large proportion of the diarrhea that occurs in young calves (up to about 14 days of age) is due to infections with viruses (e.g., rota and coronaviruses), bacteria (e.g., some strains of E. coli), and parasites (e.g., cryptosporidia).

The infection itself is not life-threatening to the calf, but the fluid and electrolyte losses lead to serious consequences. Among other things, the infection causes damage to the intestinal mucosa. This makes it harder for nutrients to be absorbed, which leads to a negative energy balance with emaciation.

If an infection occurs, the intestine tries to “flush out” the pathogens by secreting (excreting) water. This defense mechanism leads to high water losses. As a result, the calf can lose 10 % of its body mass per day in moderate diarrhea (as much as 20% in severe diarrhea).

Since electrolytes (e.g. Na+, K+, Cl–) and buffer substances (e.g. bicarbonate) are also increasingly lost during this process, electrolyte deficiency and hyperacidity of the blood (acidosis) occur. Each of these symptoms must be compensated for as quickly as possible, otherwise the calf will die in most cases.

In some cases, feeding-related diarrhea may also occur. This can be avoided by ensuring optimum drinking temperature, milk replacer concentration, sufficient drinking quantity and good water quality and hygiene.

The best prevention against diarrheal diseases is good colostrum management. In addition, good hygiene through regular cleaning and disinfection of maternity pens for calving and calf pens including all objects such as feeding buckets and teats (nipples) is a very good prophylactic measure.

If the first signs of symptoms occur in a calf, such as slightly watery stools, a reduced general condition, weakness, or reduced skin tension (skin turgor), immediate oral therapy with an electrolyte solution is the remedy of choice to prevent or compensate for the loss of water and nutrients.

In progressive disease, weakness in drinking and severe water loss often occur. At this stage, treatment with infusion therapy is necessary. If the calf begins to drink after the infusion, it should be switched back to oral therapy.

When administering fluids and electrolytes, care must be taken to ensure an adequate proportion of buffer substances such as hydrogen carbonate (bicarbonate), since in most cases pronounced acidosis also occurs. Failure to counteract the acidosis can lead to further symptoms of illness, such as hyperventilation or fatigue, and may even lead to recumbency.

Infection also causes severe damage to the intestinal mucosa. Important nutrients, such as glucose, can therefore be absorbed more poorly. An additional supply of easily digestible nutrients is therefore important to prevent a negative energy balance. The more severe the diarrhea, the longer the calf needs for the recovery process.

Electrolyte solutions which contain a high proportion of bicarbonate for the necessary compensation of acidosis should not be fed at the same time as milk is given, otherwise this can lead to faulty fermentation of the milk and an increase in diarrhea. By alternately feeding milk and electrolyte solution, the calf can optimally absorb the necessary nutrients and fluids throughout the day.

Oral therapy using electrolyte drinks makes it possible to compensate for fluid losses of up to 6 liters per day. The electrolyte drinks should be given in addition to the normal milk feeds as intermediate drinks, and the number should be based on the severity of the disease in order to ensure nutrient intake in line with requirements. For moderately severe diarrhea, two to three times of 2 liters each is recommended. 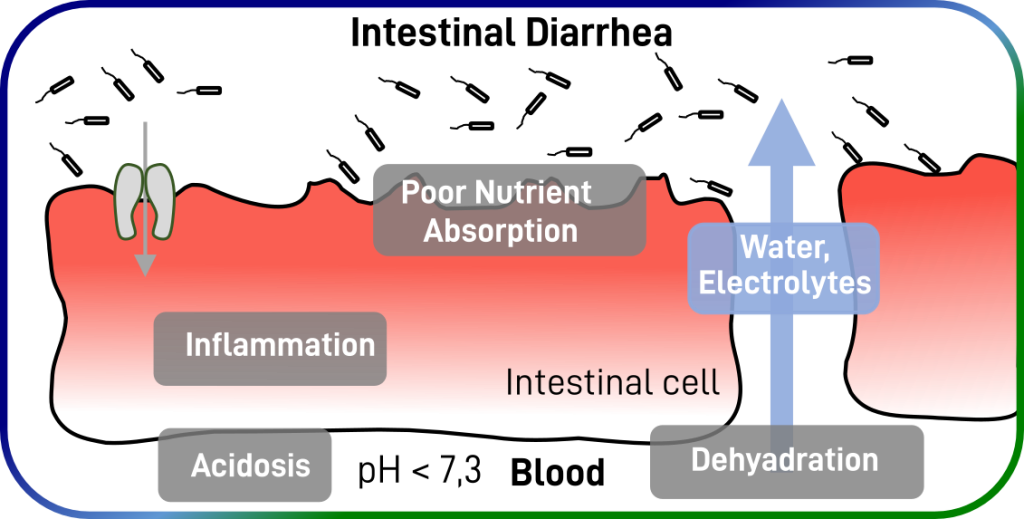 In infectious diarrheal diseases, the pathogens cause damage to the intestinal mucosa. The formation of the protective mucus layer is also reduced and inflammation of the intestinal tissue occurs. As a result, the intestinal cells die, which on the one hand are responsible for nutrient absorption, but on the other hand also represent a protective barrier. This leads to increased absorption of toxins, among other things, and further weakens the immune system.

To counteract this, rapid and targeted therapy with electrolyte drinks is necessary. This allows the intestinal cells to regenerate quickly and resume their proper function.

Scientific studies show that Glycine has a positive effect in diarrhea therapy. The use of this amino acid results in increased absorption of electrolytes by means of intestinal co-transport and increased water absorption, which counteracts the losses incurred. In addition, glycine also has cell-protective and anti-inflammatory effects on intestinal tissue (Razak et al., 2017).

Butyrate is the salt of the short-chain fatty acid butyric acid and shows positive effects on intestinal tissue. Thus, butyrate is a preferred energy supplier for intestinal cells, which promotes their formation and regeneration (Górka et al., 2018). As with glycine, butyrate also results in the absorption of electrolytes and water in the intestine, having a diarrhea-lowering effect. It also has an anti-inflammatory effect and strengthens the barrier function of intestinal cells (Leonel and Alvarez-Leite, 2012).

Further positive effects in diarrhea therapy can be achieved by using specific phytogenic agents. Diarrhea often also causes painful, spasmodic contractions of the intestinal muscles. Some phytogenic compounds act directly on the intestinal muscle cells by inhibiting ion channels, which has an antispasmodic and sedative effect (Kamatou et al., 2013, Heghes et al., 2019). In addition, many of these compounds exhibit antibacterial activity and have anti-inflammatory and antioxidant effects (Bakkali et al., 2007). Other agents have a direct effect on intestinal cells and can promote barrier function or even mucus production (Manneck et al., 2021). In addition, these substances promote the calves’ desire to drink and thus increase the willingly intake of electrolyte drinks.